Way back when, I had to decipher the mechanism used in Windows PE to run stuff, i.e. to kick off the MDT/BDD processes.  It’s been years since I looked at that, because once you do it and it “just works” you don’t worry about it much any more.  But I had an opportunity recently to “re-learn” how that works.  There is some documentation that explains this, but given that it’s Windows Vista-era and no longer being maintained, there’s no guarantee that it will continue to exist.  Plus, there’s some room to expand on its description.

You probably wouldn’t be surprised to know that Windows PE shares a lot of code with “full” Windows, so the startup process is fairly similar.  Eventually, it gets to the point where the winlogon.exe process is started, and that (eventually) enables users to sign in and access the desktop.  But before it does that, it will run whatever command it finds in HKLM\System\Setup\CmdLine.  That happens at least when certain SetupType, FactoryPreInstallInProgress, and SystemSetupInProgress values are set in that same HKLM\System\Setup registry key.  In Windows PE, all three of those values are set to 1.  In Windows PE, the CmdLine is prepopulated with this: 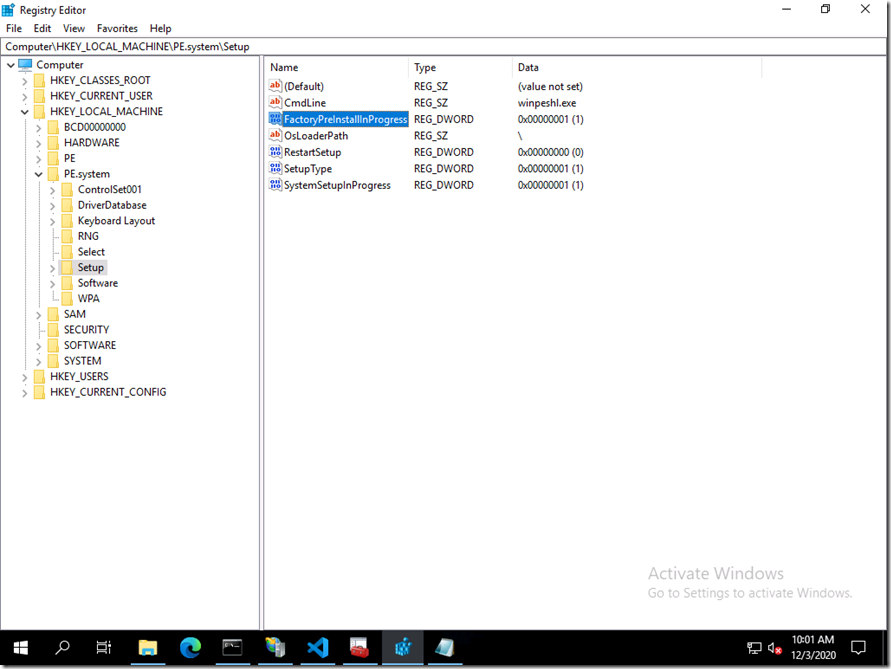 Super-simple, just instructing winpeshl.exe to run bddrun.exe and pass it a “/bootstrap” parameter.  But what if there is no winpeshl.ini file (which does not exist by default in Windows PE unless you add one)?  In that case, winpeshl.exe will automatically run the command “%SYSTEMROOT%\System32\cmd.exe” with the parameter “/k startnet.cmd”.  As you can probably guess, that will open a command prompt that runs whatever is in startnet.cmd.

So what is in startnet.cmd then?  A single command, executing “wpeinit.exe”.  By default, that will initialize networking, optional components, and a bunch of other stuff, so it’s essential to the operation of Windows PE.  If you want to see the details of what it did, the X:\System32\wpeinit.log file is key:

(Some of you might have looked at this file before because it can be useful to investigate why Windows PE is failing to initialize properly, e.g. when you added a bad drivers or didn’t allocate enough RAM.  If one of the startup activities fails, WPEINIT will open a new command prompt to let you investigate.)

The first line of that log is particularly interesting:  WPEINIT looks for an unattend.xml file to tell it what to do.  Here’s an example from MDT:

If you want to see all of the available settings, use the Windows System Image Manager to see what is available in the “windowsPE” settings pass.  Only those settings will be processed.  In the MDT case, the file just sets the screen resolution (although I’m not 100% sure that works all the time) and runs “wscript.exe X:\Deploy\Scripts\LiteTouch.wsf” to start or resume the MDT process.

So let’s review the default process:

And you can modify every step of that process:

Now look at how MDT does it:

It’s worth explaining why that’s being done:

So this is all to create a nice, clean “visual effect.”

While we’re going through all of this, there’s one other item worth mentioning:  The background wallpaper.  By default, Windows PE will use the “%SystemRoot%\System32\winpe.bmp” for the background, and it finds that path from the registry at HKLM\Software\Microsoft\Windows NT\CurrentVersion\WinPE\CustomWallpaper.  So if you changed that registry key in your Windows PE boot image, it would use that instead.  Or you can cheat and just overlay the winpe.bmp with your own content and it will display that instead (which is what MDT does).  If we were in the full Windows OS, it would be the shell (Explorer.exe) that displayed the wallpaper, but that’s not running in Windows PE.  So what displays the wallpaper?  That’s one of the other things that wpeinit.exe kicks off:  It starts a WallpaperHost.exe process that takes the place of Explorer.  You can see it running in Windows PE: 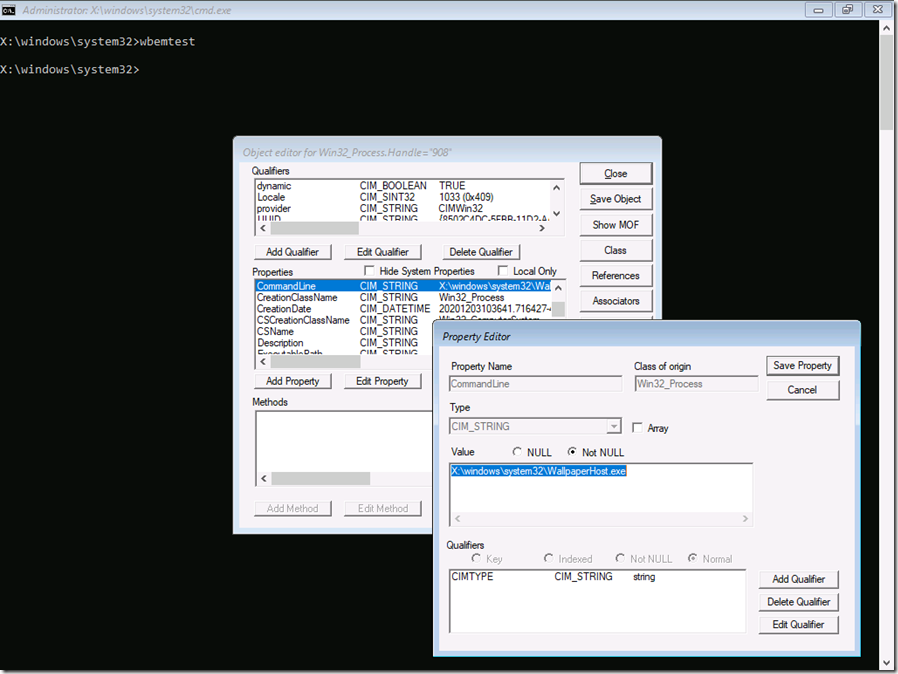 That then enables wpeinit.exe to call a standard API to set the wallpaper to the file specified.